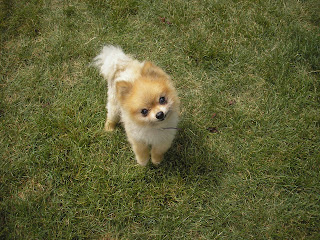 We don't know a lot about Punkin's history. He was a breeder surrender and taken in by WolfSpirit's Toy Breed Puppy Mill Rescue. He was to be transported to another rescue group but the day before the transport, the second rescue group decided they did not want an older dog that would be slow to be adopted (he's about 9 yrs old.)

Punkin needed to be moved so we picked him up anyway with the intention of fostering him but once his foster dad saw him it was a love at first sight. Punkin is a tiny little Pomeranian, with a really big attitude. He has about 3 teeth in his head and has problems with his right front leg. The vet thinks it may have been broken at some point and left untreated. He has this adorable little move where he backs into you when he wants picked up and he barks his dad out the door every morning.

He sleeps on the pillow at night and thinks nothing of chasing other dogs three times his size if they annoy him. He is as adorable as his photo and fits right in with the rest of the Spoiled Royals.
Posted by SpoiledRoyalsMom at 9:53 AM 2 comments: Links to this post 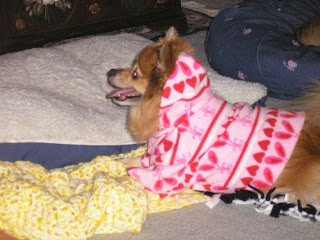 Sunny, also known as "Sunny Delight" is a doll. She was originally rescued by Puppy Mill Rescue during Awareness Day 2006 in Lancaster, PA and later adopted by us. Sunny came with quite an attitude, we later learned that her owner had died and a family member dumped her at the shelter.

A shelter worker said she believed Sunny was originally from a mill. She may have been but she had lived as a much loved and very spoiled dog and coming into a home with lots of other dogs was initially very difficult for her. She was snappy & snippy and not at all happy to have to share her persons. Over the past few years Sunny has learned to play nicely with the other dogs, she understands that 4:00 pm every day is her time for a belly scratch and she knows that no matter how many others are here, she is a much loved little pupster who will always have a special and unique place in our hearts.

She loves to go on walks, thinks going to the groomer is the best thing since sliced bread and is convinced that Pup Corn is the treat of choice by all discriminating dogs. The one thing Sunny has never gotten over is that she absolutely hates to have her picture taken!
Posted by SpoiledRoyalsMom at 9:33 AM No comments: Links to this post 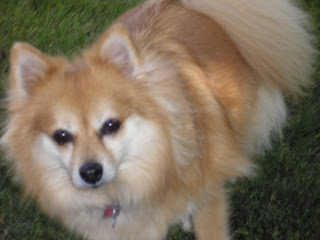 Eight year old Holly was taken under the Puppy Mill Rescue umbrella from a back yard breeder in Ohio. We adopted her along with her two Pomeranian siblings in July of 2007.

She is our "Foxy Lady" and although she came into rescue as a frightened, skinny and unhappy dog, she has adjusted to freedom beautifully. She literally jumps for joy over the silliest things.

Tell her it's treat time and she jumps in the air with all 4 paws off the ground. Ask her if she wants a toy and smiles and hops will accompany her yips of joy. She is a happy girl who loves nothing more than to run, run, run in her very own fenced yard. She greets every day with a smile and reminds us what it means to simply be a happy dog.We have watched her change from a fearful dog not sure of what was going to happen next to a happy, bouncy, joyous dog who expects a belly rub at 7:30 every night and if we forget, she is right there reminding us.

It has been a pleasure to watch Holly go from a frightened, distrustful dog into one who welcomes each day with a huge smile on her little foxy face.
Posted by SpoiledRoyalsMom at 9:24 AM No comments: Links to this post 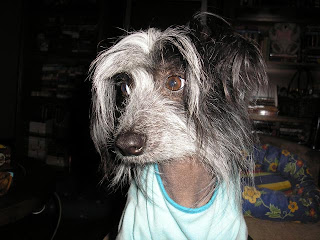 Oscar was rescued from a Lancaster, PA puppy mill in September of 2005 during Puppy mill Awareness Day 2005. He is a hairless Chinese Crested and the clown in the Spoiled Royals pack.

Oscar was adopted in October of 2005 but the adoption did not work out so he came back to the rescue and we agreed to foster him again. After a couple of weeks his foster dad decided there was a reason Oscar was returned and the reason was he belonged here as a Spoiled Royal - and I must agree, it was an excellent decision.

He has the most expressive face, loves his fur siblings as well as his Dad & me and there is not a day that goes by that we don't laugh out loud at one of his antics. A rescue friend, who helped bring him back to us when his adoption did not work out, refers to him as her "Knight in Shining Armor", I don't know about the armor, but he is definitely a happy and loved "Knight" in our pack.
Posted by SpoiledRoyalsMom at 9:19 AM No comments: Links to this post

Callie, Our Shy One 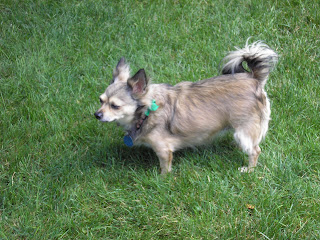 Five year old Callie came from the same terrible place as Myla and even though she was only 9 months old when she was rescued, she still deals with fear and trust issues.Callie was adopted by a wonderful rescue friend who became ill and needed to place Callie in a home that understood mill dogs. Callie came to Camp Spoiled Royals in May of 2006 and while her Mom could have her back if she was ever able to take her, we consider this a case of shared parenting.

Callie loves the other dogs here and plays, plays, plays with them. She needed to be in a home where she had other dogs to interact with and she certainly has that here. She still has problems trusting people but will come to us for an ear scratch when we are sitting down, she will always take a piece of Pup Corn from our hand and she loves cuddle time around 9:00 or so at night when things are quiet and the others are unwinding from their day. She hops up on the sofa and climbs into my lap and politely asks for a belly rub. She is secure enough in her trust that if a belly rub is not forthcoming she will paw and nudge until I get it in gear. We love her dearly and get such a kick out of her playing with the others. We are confident that in time she will totally forget her first 9 months of life and understand that is completely a thing of the past.
Posted by SpoiledRoyalsMom at 9:05 AM No comments: Links to this post 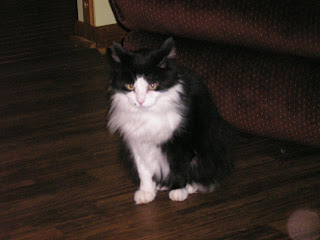 Data is the lone cat in our home - born in 1993 and surrendered to an animal shelter at the age of 2 because the son in his original home developed allergies. Their loss was truly our gain. Data is everything you could want in a cat, tolerates our dogs with much patience and is most definitely a Spoiled Royal.
He's a great guy with a typical cat personality - he wants what he wants when he wants it and on occasion he wants our attention and will condescend to allow us to play with him. lol

He gets along with all of the dogs in our home (or they all get along with him) and has been known to rabble rouse now and then by reaching out and tagging a passing pupster. He has been known to cuddle in a doggie bed with one of his fur siblings and tolerates the occasional tongue licking he receives from one of the dogs. He has never been declawed but is very good about using his scratching post and not our furniture. He is the perfect cat in a houseful of dogs. Next to Tucker, Data is the alpha in our home and as any cat lover knows, rules the roost with a regal air.
Posted by SpoiledRoyalsMom at 8:55 AM No comments: Links to this post 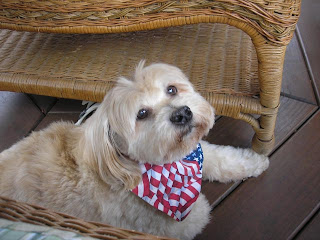 Tucker came to us from Forgotten-4-Paws rescue in December of 2003. He had been abandoned in the middle of the night, in an outside cage in freezing temperatures at a local vet clinic. He was covered with Velcro so the rescue Angel who took him in named him that. When we met him, his new dad named him "Tucker" and the name is appropriate. When Tuck wants a full body scratch he "tucks" his head against us. It's such a sweet move that he always gets his way!

We foster puppy mill survivors and Tucker has been a God send to these dogs. Easy going, lovable and the most gentle alpha dog we've ever seen. Tuck is the one who first greets the new foster, taking them under his wing, teaching them how to walk through door ways, go up and down steps, take treats, where the water dishes are and keeps frightened dogs from fear fighting. He has been known to head butt a dog who barks too much or takes an aggressive stance. Tucker will get between two dogs thinking about squaring off and stop the behavior very quickly, he keeps order in the pack and makes us laugh every day. He is a great dog and we are so thankful Forgotten-4-Paws allowed this guy to come into our life. Every day with Tucker in it is a good day!
Posted by SpoiledRoyalsMom at 8:26 AM No comments: Links to this post