Our Gentle Alpha is Gone

August 6, 2012
I knew when I woke up that I couldn't put it off any longer. Our Lhasa Apso mix Tucker was in pain. In addition to his arthritis, Friday's visit to the vet showed fluid on one side of his heart. Age and a tumor were not being kind to him.  Saturday the vet called to say he was also in renal failure. Damn, damn, damn!

We have a lot of dogs, yet each one is special, each is loved. For years Tucker was our gentle alpha. He ruled his pack with kindness and heart. It took me years to figure out he was the alpha in our pack because the others followed him so readily. Tucker never barked or nipped, he just set the tone with his attitude. The others all knew he was in charge and happily followed his lead.

In his younger years he loved to chase the chipmonks in our yard and I used to send monthly emails to his foster mom Andrea about his antics. I think she loved him almost as much as we did. That was the thing about Tucker, everyone who met him fell in love with him because he was such a good dog. Yeah, I know all dogs are good (and they are) but Tucker was special.

Years ago I had a little Yorkie mix who started having some kind of seizures in the last year of her life. She would come out of the seizures disoriented and shaking until one day, in the middle of a seizure, Tucker laid down beside her and wrapped his body around her. When she woke up, she was cuddled in Tucker's center. She stayed there until she quietly came back to herself. Loved, protected, safe. A year or so after losing Taffy, Mason came here as a foster dog. He came straight out of a mill and was at a loss to do the simplest things.

Mason was afraid to walk through a door way, he didn't know how to go up and down steps, he was afraid of Jim and me. It was Tucker who showed him how to walk through a door, go up and down steps and that it was okay to trust Jim and me. Tucker was an amazing dog and the real reason this was such a good foster home.  We really did very little, Tuck showed the fosters the ropes and vouched for Jim & me. He let the fosters know that we could be trusted and that in this house voices did not shout, hands did not hurt, dogs did not fend for themselves.

We loved him, he loved us, that was all that was needed. Until August 6, 2012. On that day Tucker needed help so he could leave us. He was in pain, he was old, he was not going to get better, there was no magic pill that would restore his health and his youth.  It's easy to explain how much he was loved, hard to explain how much I hated to let him go. God Speed Tucker, Mom loves you. 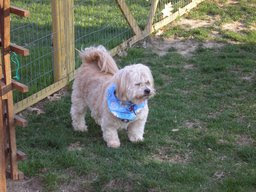 Posted by SpoiledRoyalsMom at 1:30 PM No comments: Links to this post