It's been a difficult 19 months. We've lost four Spoiled Royals Holly, Myla and Punkin, and Sweetie. Three wonderful Pomeranians and a happy Yorkshire Terrier all gone in less than two years.

Holly was unquestionably the happiest dog I've ever met. She didn't walk, she bounced. She had a silly sense of humor and loved to sucker her fur siblings into thinking something was going on. She would suddenly hop up, start running and barking and get them all riled up then quietly sit down and watch the fun.

She was a happy, silly little dog with the look of a fox and she always had a smile on her face. She loved life, loved her fur siblings especially Myla and could not stand to be placed in a crate. What a little character she was. 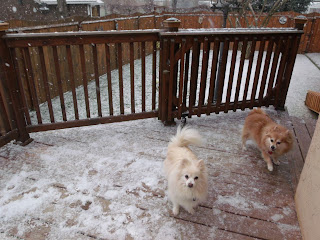 Every day at 4:00 PM she came to wherever I was and pawed at me. I would pick her up, hold her in my arms and give her a belly rub. It took a long time for her to discover the joys of a belly rub but once she did, she was adamant that she received one daily. How I miss that silly dog demanding her daily belly rub. Out of the blue, in early April 2014, just after turning 14 yrs old,  she laid down on the deck and went to sleep and simply did not wake up.  It's been almost two years and I still can't reconcile our beautiful, spunky little red Pomeranian is gone.

A few weeks later in April of 2014 we had to help our little Yorkie Sweetie to the bridge. Her cancer had progressed to the point we couldn't keep her comfortable. She was such a good little dog, always in a good mood, always bossy, always fun. I never like putting any of our dogs down but it was especially hard to let her go. 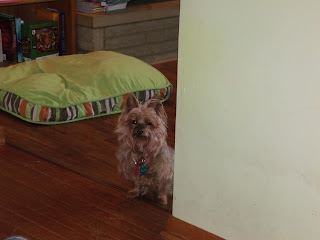 I've told the story many times but she came to us as a Yorkie in need of a new home. After we decided she was home, I wanted to rename her because I didn't care for the name Sweetie. I spent a good two weeks playing with different names, trying to decide if they fit her. I finally gave up and stuck with her original name because honestly, she was (and always will be) a Sweetie. She was 6 months shy of her 15th birthday when we lost her and not a day goes by that I don't miss her.

All went well for several months and then Myla, our beautiful, blossoming white Pomeranian passed away in September of 2015 just two months away from her 16th birthday. She was the most frightened dog when she came here and it took years for her to trust us but oh what a change once she did. Like Holly, Myla had a perpetual smile on her face. Although sudden moves still could startle her, she quickly realized whatever scared her was not going to harm her and she would stop mid-flight. She just blossomed with love for us, wanting to be where we were, barking a "hurry up" at mealtime, always, always a joy.

She went outside one morning very early to potty and something happened. We found her laying in the grass, unable to stand, breathing hard. We brought her inside and held her as she took her last breath. Such a majestic beauty, such a sweet dog. Three well loved dogs gone in the blink of an eye. And then there was Punkin. 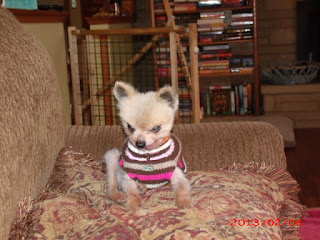 Punky was the smallest dog here and also the oldest at almost 17. His health had been failing for the last couple of years but he kept chugging along, always bouncing back from whatever health crisis he faced. He was a tiny dog with a huge heart, no fear and fiesty as could be. This sweet little guy is my cautionary tale.

I knew his health had been failing. He wasn't eating well, he started stumbling, losing his balance, and developed dry eye.  He was just off. I was taking a couple of other dogs into the vet and added Punkin to the visit for a quick check. I knew he was not great but I just thought he was getting old and maybe needed some meds. He seemed thinner and not as sharp but Punkin was a survivor. It turned out he was in renal failure, suffering and in pain. There was nothing to be done except help him to the bridge to stop his suffering. Oh how I hate that he was that sick and I didn't see it. Learn from my lesson, when you have a senior dog in poor health, get an objective pair of eyes on him. This tough little guy suffered more than he should have and that breaks my heart. One thing I do know for sure is that he knew he was loved every minute of every day that he lived here. Like his three fursiblings, he is missed every day.

Losing four dogs in 19 months is difficult. It seems like we had no time to recover from losing one and then another senior gained their wings. Was it worth it?  Yeah, it was. Life is filled with valleys and peaks and losing a beloved pet is definitely a valley, but the joy of loving one is certainly a path to the highest peak.

Goodbye dear Holly, sweet Sweetie, majestic Myla and precious Punkin, thank you for being our dogs. We miss you guys so much.

Posted by SpoiledRoyalsMom at 5:32 PM No comments: Links to this post