Michael Vick raised, fought, tortured, brutalized and killed pit bulls. He was arrested, tried, convicted and sent to prison for 23 months. He was released from prison, given a second chance to play professional football and the Humane Society of the United States did their best to white wash his actions.

I've never read or heard anything from any of his interviews suggesting he understands why what he did was wrong and why his behavior was so abhorrent. Recently he indicated that he wanted a dog and that a lifetime ban on pet ownership was not fair to his children. . . .what would he tell them? How could he explain this to them?

Well, he could tell them that at one point in his life, Daddy raised, fought, tortured, brutalized and killed pit bulls. He  could say Daddy was arrested, tried, convicted and sent to prison for 23 months.  As part of his sentence, he forfeited the right to own a dog for the rest of his life.  He could tell them that sometimes, even when you say you are sorry, even if you are sorry, even if you go to prison to pay your debt to society, the harm that you caused can be so great and so damaging that the impact lasts a lifetime.

I wonder why it doesn't occur to Michael Vick to simply tell his children the truth. . . . .
Posted by SpoiledRoyalsMom at 12:51 PM No comments: Links to this post

What's happening with the Spoiled Royals this week:

The Spoiled Royals  are sending birthday wishes to two of their Aunts. Elizabeth, who rescues German Shepherds had a birthday over the weekend and Carol whose birthday coincided with Martin Luther King day and resulted in her having her birthday off!

Moving right along, Sweetie and Gaylin were outside earlier playing in the snow. ﻿Their little feet were cold so they came inside after just a few minutes. 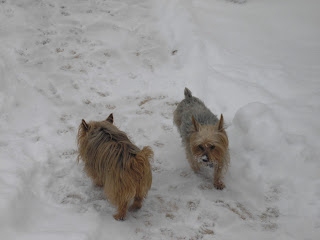 Gaylin nestled into my jammies and took a nap on our bed earlier today. Isn't he the cutest little guy? 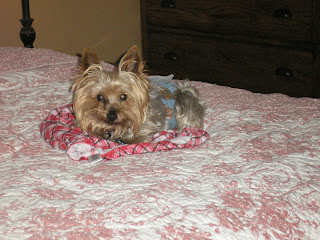 Sweetie, Punkin, Prince and Oscar jumped on the love seat and took a nap with their dad over the weekend. They are great little nap buddies. 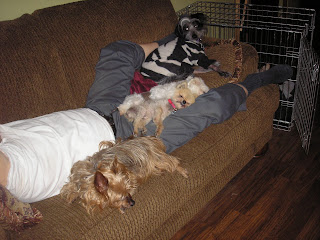 Done for the day, stop back later in the week to see what the SR's are up to.

﻿
Posted by SpoiledRoyalsMom at 3:14 PM No comments: Links to this post 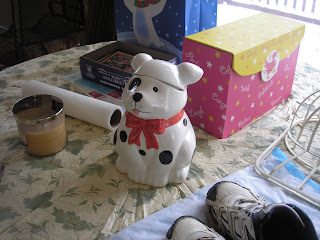 Around our house, it's very important to have a treat jar handy.  This one is on the sun porch. When someone actually potties outside, their treat is immediate. Maybe someday some of our mill dogs will "get it!" 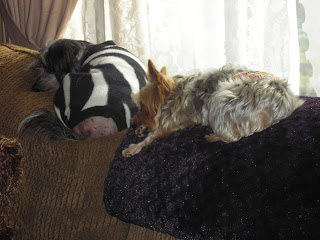 Oscar and Gaylin thought it would be nice to try to grab a little sunshine while they napped. 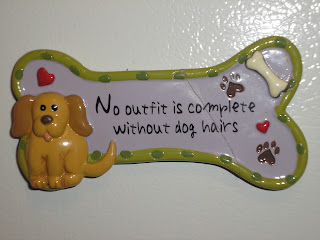 They love hopping on the back of the sofa and taking a nap. It also lets them look outside so they can keep an eye on the street outside our home. LOL
A gift from our youngest daughter Heidi. It's funny but oh so true! Here's a tip, buy stock in those sticky rollers, we go through them like candy! 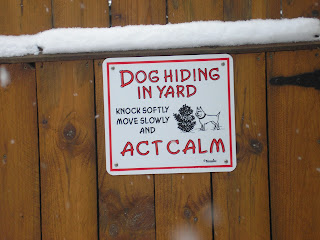 Another Heidi gift. . . . yes, she is a happy and funny young lady. The dogs all love her too. 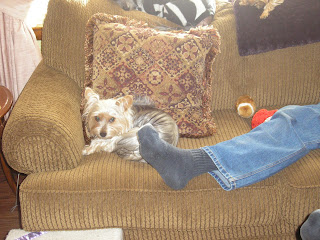 Nicki loves curling up on the sofa with her foster dad. 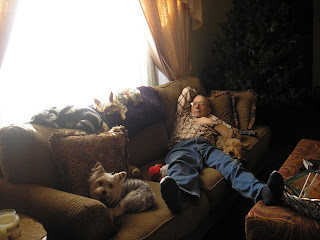 Do you think we need a larger sofa? Oscar, Gaylin, Nicki, Sweetie & Jim all conked out.

This gives you an idea of what it's like, "Goin' to the Dogs" at our place.
Posted by SpoiledRoyalsMom at 2:58 PM No comments: Links to this post

I'm on several email lists that discuss various topics in rescue. Groups of strangers across the country join together to share thoughts, ideas, and suggestions to help pets in need. There are email lists that deal specifically with fundraising ideas, others that help transport pets from one end of the country to the other. Animal lovers share food recipes, medical information, and shoulders to cry on. Whatever your question, someone, somewhere on an email list can help.

For me, one of the challenges of finding a forever home for a foster dog is dealing with the applicants who are not the best choice for that particular dog. A rescue takes dogs into their hearts because the dog came from a sub-standard kennel or they were strays fending for themselves. Perhaps they were surrendered by an owner who could no longer afford their care or they had been tied outside for years. Or, their beloved owner could have died and they have no place to go. Most dogs in rescue have had a difficult time at some point and we want the rest of their lives to be better. For my fosters, I want the adopted home to be a great fit for both the adopters and the foster because I want the foster to be safe, loved and happy. Finding that home is often a process- kinda like the saying "you've got to kiss a lot of frogs before you find Prince Charming."

The poem below was emailed on one of my dog lists and included permission to share.  I've never met Marti Hough, the author of the poem, but I think we are sisters of the heart. . . . 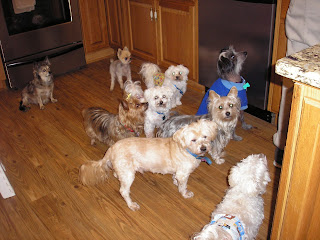 I Want to Save a Rescue Dog

I want to save a rescue dog that no one else would pick.
But please... I couldn't handle one that was too old...or sick.


I want a dog with fluffy hair that's silky to the touch;
A dog I wouldn't have to groom (the work would be too much!).

My allergies are bad, and so the dog must never shed
or jump up on my velvet couch or sleep with me in bed.

The size is not important, but the dog can't be too tall.
And while I'm not being choosy, I'd prefer he not be small.

Cute and cuddly, sweet and smart and one who doesn't chew.
Of course he must be housebroken (my carpeting is new).

A dog who's quiet in his crate (I work twelve hours a day);
A dog who isn't hyper, and yet one who likes to play.

Of course all vetting must be done (it's easier for me).
And I don't want to pay a lot for an "adoption fee".

Ah, yes...it truly warms my heart to save a dog in need.
I'll pick a dog that no one wants: a noble choice indeed!


A dog that no one else could love: a homeless dog that's needy....
I only wish those rescues weren't so fussy--and so greedy!

Posted by SpoiledRoyalsMom at 9:49 AM No comments: Links to this post